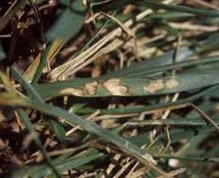 This is a summer disease that infects perennial ryegrass, tall fescue and bentgrass. In early morning, on dew-covered grass, a white mycelium of fungus can be seen. Most often, a circular patch of lawn appears to be sunken in. The patch will appear very thinned out. When tall fescue is infected, you can see irregular tan or light brown lesions on the individual grass blades surrounded by dark brown borders. It is important to reduce moisture on area infected. In severe cases a fungicide application can be warranted. It is best to follow up with core aeration and overseeding in the fall to repair damaged areas. 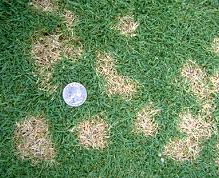 This disease appears anytime from early to late summer. It appears as white or tan dead turf about the size of a silver dollar. It will most commonly appear in lawns that are cut 1-3 inches tall. The spots may run together creating larger areas of dead turf. The leaves show yellow-green blotches initially which turn to a light straw color. This disease occurs when our temperatures are around 80 degrees and we have high humidity. The worst cases of dollar spot usually involve lawns that are irrigated through the summer months. This disease is most severe when lawns are low in nitrogen. 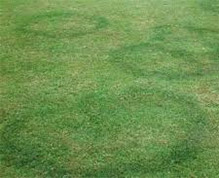 This disease usually occurs in late summer or early fall. The first symptoms will be a cluster of mushrooms on the outer edge of rings. These rings are dark green and usually fast growing turf. The bands infected can be 4 – 12 inches in width. This disease is produced by mushroom fungi that live in soil and thatch. The excess growth of the rings is thought to be caused by the decaying organic matter by the fungi. Fungicides are usually unsuccessful in controlling this fungus. The best option is to remove the top 6 inches of topsoil of areas killed and replace the soil and plant new grass. 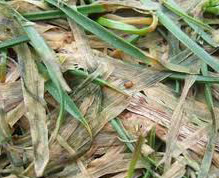 Gray snow mold is usually noticed once the snow melts and the turf is visible in spring. It will typically be found in areas where there had been the largest accumulations. For example, areas around driveways or sidewalks are areas where the disease is most prevalent. You will notice a white crusted area where the grass blades appear dead and matted together. These areas can be a few inches in diameter up to several feet. Gray Snow Mold will typically kill the blades of the grass, but does not kill the root or the crown. A fungicide is usually not necessary. Raking up and “fluffing up” the area infected allows air in and promotes new growth.

Leaf Spot and Melting Out Diseases 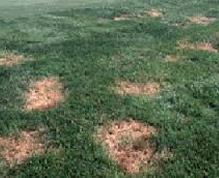 Although these diseases can infect all grass species, Kentucky Bluegrass is most susceptible to infection during April to early May. This fungus becomes active during cool and wet weather. Excess nitrogen in the spring can make this Nitrogen applications should be approximately 1 lb of nitrogen per 1,000 square feet of turf. If an area of turf is known to have a problem with this disease, it is recommended that a fungicide is applied in early April just before the grass begins to green up. Fungicides would be necessary every 2 weeks until the end of May to prevent this disease. The more permanent solution is aeration and seeding in the fall with disease tolerant Turf Type Tall Fescue varieties. 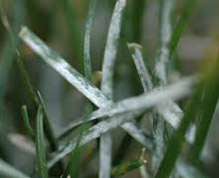 Kentucky Bluegrass planted in shady areas is most susceptible to this disease. Tall fescues are very resistant from this disease. Conditions favorable for disease development include poor air circulation, high humidity, shade, and cool air temperatures. This disease presents itself as a gray-white, powdery powdery growth on the upper surface of the grass blade. Fungicides are applied to control this disease. 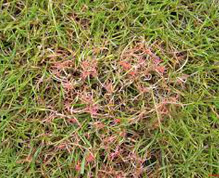 This disease occurs in moist, humid weather, usually in the spring months when air temperatures are between 65 degrees and 75 degrees. Grass will appear as if it has a bright thread-like pink fungus mycelium affecting the tips of the grass blade. Disease development usually does not warrant the application of fungicides. Red thread is typically controlled by applying adequate levels of nitrogen for turf growth. Once nitrogen is applied, Red Thread will typically “grow out”. 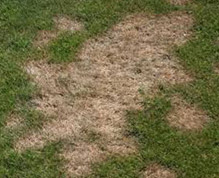 Pythium Blight can develop in air temperatures between 85-95 degrees. The warmer the temperatures, the more quickly infestation and damage can occur. This disease begins as ½ inch to 4 inch diameter spots that appear water-soaked in appearance and then begin to shrivel up. Disease patches turn a light brown or gray color. Large groups of infection may join together to form a large area of infection. Infected areas may be covered with a white cobwebb growth. The best preventative is to have your lawn on a lawn fertilization program to be sure it is provided adequate nutrients. If infection occurs, fungicides may be warranted. They should be applied just before a long stretch of hot, wet weather is expected. 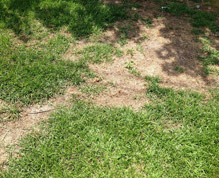 Summer patch can infect Kentucky Bluegrass and Fine Fescues during mid-summer when temperatures are in excess of 82 degrees. It is most common in areas that receive heavy foot traffic, poor circulation and insufficient drainage. This disease begins as 2-3 inch circular patches that increase in size to patches up to 12 inches. These patches will appear yellowish brown in color. In severe cases, this fungus may destroy large areas of turf. Prevention includes high mowing height and core aeration/seeding in the fall. Fungicides may be applied every two weeks (expensive), but it is typically a better to aerate and seed the lawn in the fall.